Credit Cards and COVID-19: is paying with cards safer? 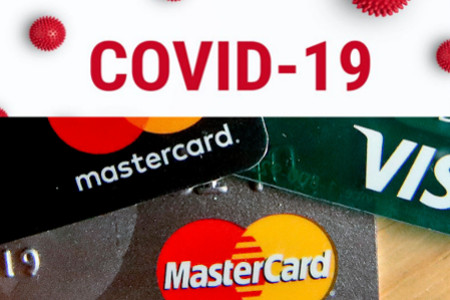 The crisis induced by COVID-19 will definitely have an impact on most of our activities. Industries such as airlines, restaurants, tourism or entertainment seem to be the most affected, and we are not quite ready to assess the full impact of the crisis on our economies. In addition, what has made us what we are now, the social interactions, has been unquestionably affected and the new paradigm may stay with us for an unknown period of time. In a matter of weeks, things which we may have not even thought of before become social standards and it seems that we need to be prepared to change our behaviours.

In this context, we are looking at how the payment system has been affected and what may happen in the following period. What has been the impact of the crisis on the number of payment transactions in France? Can we expect that the wireless payment will take over the cash payment? What are the risks to get infected from manipulating cash money? In this article we will try to present a short outlook over all these elements.

How was the payment system affected by COVID?

In France, in the last weeks it was registered a decrease of the number of payment transactions. This can be explained potentially by two reasons:

The whole decrease of economic activity in the last months had also an impact on the payments by electronic means, including payments by different types of cards (-30%). Surprisingly or not, the cash payments have been even more affected, as on one hand people may see the money as "dirty" instruments and potentially infectious. On the other hand merchants also would try to avoid receiving cash in order to avoid infection. This may have a huge impact on the economy, as based on several studies, in France, as much as 68% of transactions in shop are made in are cash based on a survey presented by le Parisien.

Who has been the most affected by the latest developments?

In France, 5% of the population does not have any payment card (i.e. credit or debit). This category of population would handle all payments in cash. For instance, social benefits are paid in cash and consequently, regular payments with the merchants. However, because of the risks of spreading the virus via the paper money, it appears that the merchants were reluctant to receive cash payments, although this fact illegal in France, which put at risk a category already exposed by the current circumstances (i.e. old people or economically precariously people). A decrease of cash payments up to 50% of the normal activities have been also reported by associations gathering cash transporters.

What was the response of the authorities?

The Ministry of Health announced that the risk of infection from manipulating cash is minimal, but not inexistent. The statement trailed conclusions validated by the specialists of World Health Organization. This approach was also followed by the National Bank of France, position which is also aligned with the conclusions presented by the European Central Bank.

How did other countries handle the cash during the COVID-19 crisis?

Countries like China or South Korea decided to go even further to limit the potential spread due to the cash in circulation. They either massively replaced paper money or proceeded to their decontamination, by treatment with ultraviolet waves or in special ovens. They also confined the treated cash for some 1-2 weeks and gave the time to the virus to fade away. Yet importantly, in countries such as USA, the authorities literally quarantined cash coming from countries strongly affected, mainly from Asia.

There were voices requiring the increase of the maximal ceiling allowed for wireless payments from 30€ up to 50€, or even 60€. No official position has been announced yet, as such a decision may have an important impact on the 60 million payment cards registered in France. In France one in four electronic payments is made wireless, but we can expect an increase of the granularity of payments due to the diminishing of consumption, which may potentially lead to an overall increase of the wireless payments in the next period.

Paying with cash will probably continue and nobody should be left behind, especially in these moments when the key word is solidarity. However, if we can contribute to limiting the spread of the virus, be it marginally, the payments with cards, namely in a wireless way, are more than encouraged.

We use cookies to help us improve and create a better user experience for you. You can see here the cookies that we are using and how to opt out. Or you can: